All you LSU football fans out there can start your New Year’s Eve off right watching your beloved Tigers battle the Cardinals. If you haven’t heard yet, LSU will play Louisville in the Citrus Bowl in Orlando, Florida on December 31st. It will be Ed Orgeron’s first bowl game as a head coach and should be an exciting game.

And, if you’re an LSU sports fan and have not seen Brewster Belt Company’s LSU Sports needlepoint belt, you’re in for a treat (details below).

Since the game kicks off at 10am CT and it is the Citrus Bowl, after all, may we propose a morning cocktail with citrus…in a bowl…? Mimosas are always a simple and delicious option, but if you’re looking for a drink that’s a little more Louisiana and serves a group, Citrus Bowl Punch fits the bill!

In a large bowl, stir together first four ingredients until sugar is dissolved. If desired, add slices of citrus fruit and mint or basil leaves to the bowl as a garnish. Add ice to the glasses (not the bowl) to prevent watering down the punch and ladle the punch into glasses.

Brewster Belt wishes Louisiana the best of luck and if you need any classy LSU Tigers gear to show your support for your team, Brewster Belt has got you covered with custom, hand-stitched collegiate designs featuring LSU and other colleges with college campus needlepoint belts, wallets, key fobs, pillows and dog collars. 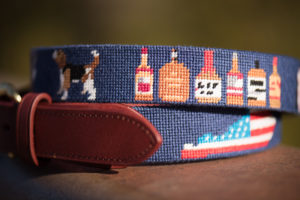 Finding unique gifts for those difficult-to- buy-for friends and family members can be challenging and time-consuming. So, before you find yourself flipping through piles of catalogs, fighting crowds at the mall or Googling until you reach the end of the Internet, check out the custom needlepoint belts, dog collars, wallets, pillows, flasks and more at Brewster Belt Company.

All Brewster Belt products are hand-stitched and made from top-quality materials. The design team can create virtually any design you can imagine (and even those you can’t). They can also help with design inspiration if you’re suffering from a creative block. Once you settle on a design, within 3 to 5 days you will receive a preview of exactly how your product will look. The team will also work with you to revise the design until you are 100% happy.

Since all of Brewster Belt’s needlepoint belts and accessories are stitched by hand (not by machine), many, many hours of work go into each product, which is why there is a 7 to 12 week lead time.

We knew you were too clever to let that blow right past you, so allow us to explain…. Although your custom item will not be ready to wrap for the holidays, Brewster Belt DOES provide you with a nifty preview card (shown below) that can be given to the gift recipient. The card has a picture of the exact custom product that is “in the works”.

The gift preview card can be printed out and put into a holiday card with a note saying that their custom needlepoint item is being stitched and will be ready in a few weeks. Then, in the depth of winter, after the last Christmas cookie has been eaten and the final Hannukah candle has been extinguished, your friend/dad/aunt/brother/dog/boyfriend will receive…(ta da!) a package containing their custom needlepoint gift and it will be like Christmas all over again.

So, let’s summarize. You need a unique holiday gift. Brewster Belt Company can help. They will help you design the perfect custom needlepoint gift for [insert name of worthy gift recipient here]. You will receive a preview card to wrap up and give. Your gift will be carefully hand-stitched and mailed out not long after the holidays. The gift recipient will be thrilled and all will be well with the world.

Please note Brewster Belt can provide gift preview cards until December 19th. After that, you’re on your own or you can purchase a gift certificate, so there is hope for you last-minute shoppers. They also offer a returning customer discount, so there’s that as well.

Below are some new belts they just finished stitching if you need some inspiration: 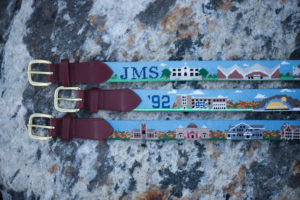 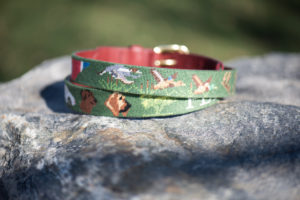